Posted on November 19, 2016 by sandstarsblog 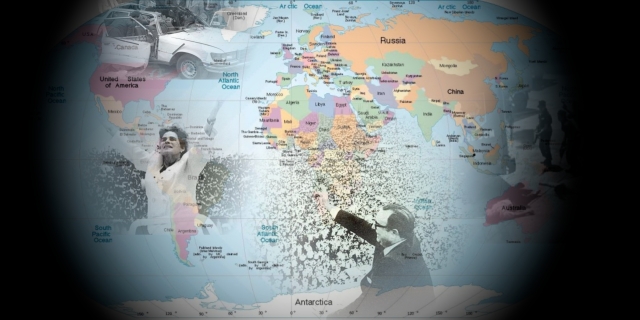 Cosmos falling falling down
Descended plutonium blasting
The inhibitions in us

The man from Nicaragua
Dies assassinated,
So What?

2
Citizens of the World
Watch out the people alighting
The ramp of the plane
Winds snug their hairs
Ears noses armpits like
Ancient gods and goddesses
Bewildered in
Our present tenses.

Balls of power twirling
Like yo-yos on shifty fingers
Once is enough to knock you down
And quite cheerfully easier
Than eating mango pies,
How Come?

I had been asked why I mentioned Nicaragua in my poem “Prime Time”? why not write something about my own country, the Philippines, which did not lack of prime time stories to tell?

Historically, it can be said that before the Philippines, there was Nicaragua. Compare the BBC country profile timelines of Nicaragua and the Philippines here [1] and here [2] :

Both countries were ‘discovered’ and named by Spanish expeditions, and struggled for centuries to become independent of Spanish rule. Finally when they were able to free themselves from Spain, they once again were invaded and dominated by another imperialist force, this time the United States of America, and experienced the brutal colonization spawned by the USA’s Manifest Destiny doctrine. Their colonizer kept meddling in their internal affairs, even after independence was granted to them, significantly shaping their histories, economies and politics of governance, marked in both countries by systemic corruption, ostentatious lifestyles of the rich and powerful, widespread poverty of the masses, and bloody liberation movements.

The two countries even had an uncanny parallelism in the matter of natural calamities, both of them periodically reeling from disastrous blows of typhoons, earthquakes and volcanic eruptions.

During the much-despised dictatorship of Anastasio Somoza Debayle, in January 1978, the Nicaraguan journalist-publisher of the opposition paper La Prensa, Pedro Joaquin Chamorro Cardenal, was assassinated. This assassination emboldened thousands of people to riot in the streets of Managua, strengthening the Sandinista’s liberation front against the dictatorship, and finally leading to the overthrow of Somoza in mid-1979. The widow of Joaquin Chamorro, Violeta Barrios de Chamorro, became president of Nicaragua from 1990 to 1996.

In 1983, five years after the death of Chamorro, it was the Philippine’s turn to have its own political catalysis in the assassination  of the opposition figure former Senator Benigno Aquino, Jr., which was squarely blamed on the Philippine strongman President Ferdinand Marcos. This galvanized the opposition to the decades-long dictatorial regime of Marcos, culminating in the 1986 overthrow of Marcos in a People’s Power revolution that propelled the widow Corazon Aquino to the country’s presidency from 1986 to 1992.

But not all are the same for the two countries. Nicaragua never allowed the dictator Somoza Debayle to return back from his exile in Paraguay. When Somoza was killed by a band of Sandinista assassins in 1990, his body was buried in Miami, Florida.

As for the Philippines, the dictator Ferdinand Marcos died of natural cause in 1989 while in exile in Hawaii. His remains were allowed to return back to the Philippines in 1993, and were interred inside a refrigerated crypt in his hometown in Ilocos Norte while his family insisted on having him properly buried in the Heroes’ Cemetery in Manila. On November 18, 2016, taking advantage of a favorable Supreme Court ruling that was nevertheless still awaiting the opposition’s motion for reconsideration, the dictator’s remains were surreptitiously flown from his hometown to Manila, and laid to rest in the Heroes’ Cemetery amidst opposition from various sectors of Philippine society.

Very much prime time story as any can be.

wild reader. writer in the wild. technologist at work. not necessarily in that order.
View all posts by sandstarsblog →
This entry was posted in collection: at the edge of things, essay, poetry, politics and tagged assassinations, at the edge of things, benigno aquino, dictatorships, ferdinand marcos, geopolitics, joaquin chamorro, nicaragua, philippines, prime time, somoza. Bookmark the permalink.