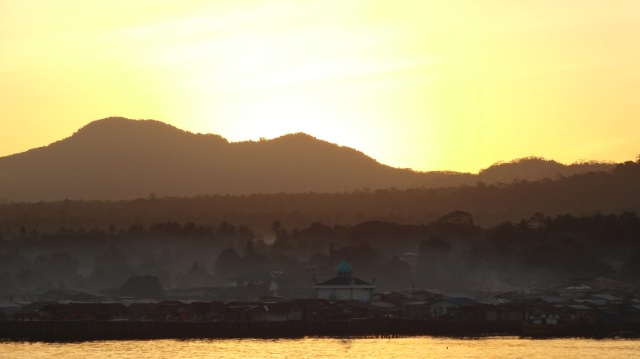 a stilt house community along the shores of patikul in the sulu archipelago at sunrise, photo by Harly Limlingan Marcuap of www.akrosdayunibers.com,  2013

the causeways rattle under
sleepy feet waking
to the call to prayer at dawn;
winds snake from
below the sea as sharp bites
to a native reality
and the tide gently laps
to grace the burdened stilts.

the inland fowls stretch their necks:
religion says a giant rooster
has flapped its wings
and sends forth life
the days message softly as a dew
may trickle down the broad leaf or
the sharp blade of the grass.

a terrain hides the grazing sun
and trees are thrifty with its light:
sunlight is as anywhere seen in the world
but distinct,
the frame of mind that sees
is as subtle as a twig
and sturdy as the trunk.
it eyes as a child would
a stranger, friend or foe,
with hope and with awe.

Awesome photos of Sulu are being featured here (and subsequent posts for the poetry collection Mt. Tumantangis and Other Poems on Sulu), with the permission of their owner, Harly Limlingan Marcuap, a fearless travel blogger who chronicles his adventures in his travel blog www.akrosdayunibers.com.

‘Dawn’ was originally written under the pen name Isnani. Of Isnani Sabtula, from whose first name I lifted this pen name, I wrote this pensively in 1999:

In college, when one time I used the pen name Isnani to join a UP English Club Literary Contest, I had told (a college) friend a story about Isnani, another Moro. Isnani was my nemesis in high school for a while. He was a soft-spoken lad just like me, a little taller than me, and was as bit as shy as myself. He came from one of the inland barrios of Sulu. His parents were farmers and Isnani himself tended the cattle and fowl in their farm during weekends.

I envied Isnani for one thing in particular: he had the pleasure of harmoniously living with mother hens and chicks and eggs. His school shirts were not always as white or as finely pressed as mine though.

He was a brilliant student, and during the end of each grading period, both our names would grab the top positions of the honors list, sometimes his name first, sometimes mine.

When at the start of our third year term in high school I did not see him in class, I felt relieved for one day. The next day, another brilliant Moro told me that Isnani died from gunshot wounds last summer while taking his cows to graze in the field. He was, the story goes, carrying a rifle with him at the time when some unknown assailant decided to grab the rifle and rustled the cattle away.

To this day, somehow, I still think of Isnani as happily feeding his farm chickens and harvesting the eggs or leading his cows to pasture against the pinkish-yellow landscape of dawn.

“Isnani is my nom de plume,” I remember telling my college friend then, “not because I need to hide behind another name but because I am no different from the many fallen and falling Isnanis out there in the seas and mountains of Sulu & Mindanao.” 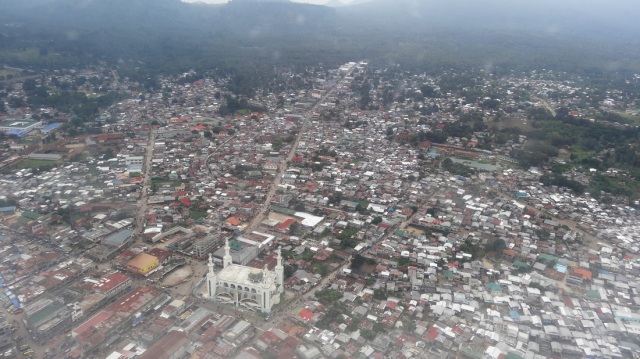 a view from the air of the town of jolo, sulu, photo by Harly Limlingan Marcuap of www.akrosdayunibers.com, 2013