Peculiar 5-7-5s and their imaginings

Posted on September 24, 2017 by sandstarsblog 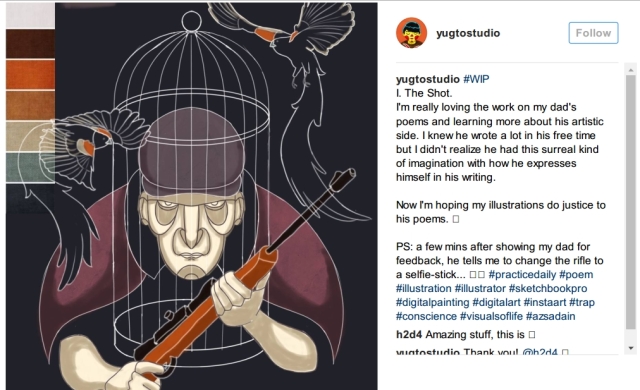 The book project I mentioned previously (in The Lives Words Live) is taking shape slowly but surely.

In this post, I share some aspects of the development process between Zee and me. Since Zee is illustrating from his base in Kuala Lumpur, Malaysia while I am mostly tied up with office work here in Jeddah, Saudi Arabia, we have agreed on some mechanics of communication and procedures to ensure we are both on the same page most of the time so that re-work, when necessary, can be minimized.

I would select a poem and give Zee the liberty to initially interpret it with very rough sketches as much as he wants, then we discuss the interpretations some more before Zee develops a particular sketch into a more detailed illustration that could go through several more iterations until we deem it satisfactory enough.

Initial ideas are shown below for the poem, “The Shot“:

two birds with one shot
and there’s but one caveat:
birds free, shooter not. 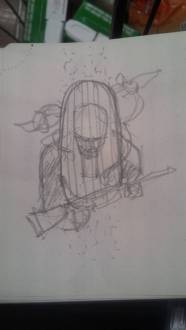 In all these, we have agreed that the computer illustrations must be done using a liberal number of layers so that alterations can be done on details, big or small, without redoing the other parts of the work. We also find layering to be very convenient in testing and experimenting with the interplay of colors among the various elements of the drawing. Below are some screen shots of the iterations while developing the illustration for “The Shot”, showing how layers help with testing the colors. 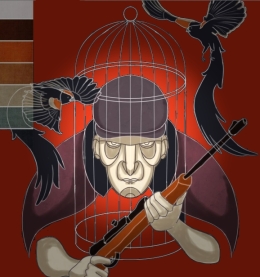 The final illustration will actually show the shooter with a smartphone camera at the tip of the selfie stick of a rifle, with face, still grim and cold, a little sideways looking up into the camera instead of staring straight at you. The final colors will be less dark, but nevertheless laden and anguished.

I expect this project to get slower than it already is, with Zee going back to university to pursue his master’s degree in architecture starting this September, but there really is no time constraint for now. We intend to continue working on the project on our weekends only, and not try to layer it with our weekday studies and jobs.

Meanwhile, we welcome your comments and suggestions on how things could be further improved. In fact, we’ll go one better:

Then imagine their worlds, and send us your interpretation/description for what might be a good illustration for a particular haiku between now and end-November 2017. If you wish to send us a rough sketch as well, please do so. If we decide to use your contribution, we will acknowledge you as an idea contributor on the page that contains the illustration, and send you a free electronic copy of the book when it finally gets published (whenever that happens!). You can send your imaginings by way of the comment section below, or by emailing sandstarsjournal@gmail.com. 🙂

find me at sandstarsblog.com
View all posts by sandstarsblog →
This entry was posted in book, essay, haiku, photography and tagged 5-7-5, computer, imaginings, layered, layers, technology, the shot. Bookmark the permalink.

1 Response to Peculiar 5-7-5s and their imaginings